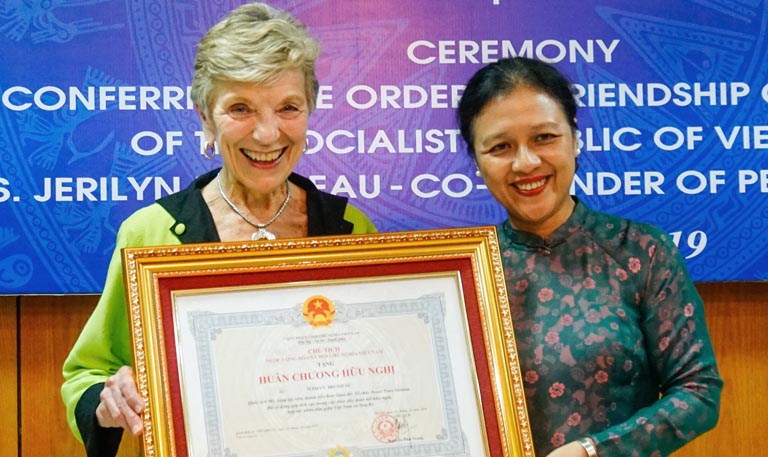 Jerilyn Brusseau channeled grief into a life lived with purpose

In January 2020, Jerilyn Brusseau traveled to Vietnam to begin a year of celebration. That year marked the 25th anniversary of an event that changed her life with the normalization of relations between the United States and Vietnam. Ever since her brother, Lt. Daniel Cheney, was shot down over Vietnam in 1969, Brusseau had known she needed to find a way, someday, to transform not just her own grief but also the grief of every bereaved family on both sides of the Vietnam War. And 1995 was the year she realized it might finally be possible.

Brusseau and her late husband Danaan Parry were among the first American civilians to arrive in Vietnam after diplomatic relations were restored. On that January 1996 trip, they took their first steps toward founding PeaceTrees Vietnam, an organization with a straightforward, though perilous, mission—to remove unexploded bombs, landmines and other ordnance from the Vietnamese countryside, and to plant trees in their stead.

That celebratory trip in January 2020 was “like a giant family reunion,” says Brusseau. The highlight was a dinner honoring more than 80 Vietnamese friends, partners, and current and former staff. At the time, no one could have foreseen that a pandemic would cancel all further PeaceTrees trips through 2021. (Brusseau, who normally travels to Vietnam two to three times a year, is hoping to return in early 2022.)

Instead, an October 2020 online forum celebrated the work of PeaceTrees, bringing together, virtually, speakers from the United States and Vietnam. The moderator, former Washington Governor and Ambassador to China Gary Locke, asked panelists why Vietnam has been so open to building relationships with Americans in general and PeaceTrees Vietnam in particular. Nguyen Phuong Nga, chair of the Union of Vietnamese Friendship Organizations, explained that “the Vietnamese people are a peace-loving nation. Generosity and forgiveness are in our DNA. We do not forget, but we are able to forgive. We do not want to live with hatred and animosity. PeaceTrees Vietnam has not only healed the land, it has healed the soul.”

This year, the AARP awarded Brusseau its Purpose Prize, given annually to people over 50 who are “using their knowledge and life experience to solve tough social problems.”

Brusseau, who is 78, says her unwavering sense of purpose was born in the terrible moment when she learned of her brother’s death. “Suddenly in that very instant I realized there were hundreds of thousands of Vietnamese families on the other side of the horizon who were losing their sons and daughters and moms and dads. I realized in that instant, someday, somehow, some way, we must find a way to reach out to the Vietnamese people to begin to build a bridge, to honor their losses as well as our own and begin to build trust and understanding. To go underneath, this word came to me, to go underneath the pathos of war. To connect there in the depths of the pain of loss and tragedy and begin to create small steps forward and of course I didn’t know how or when, I only knew that we absolutely must.”

Ann Hedreen is an author (Her Beautiful Brain), teacher of memoir writing, and filmmaker. Hedreen and her husband, Rustin Thompson, own White Noise Productions, and have made more than 150 short films and several feature documentaries together, including Quick Brown Fox: An Alzheimer’s Story. She recently completed a second memoir, After Ecstasy: Memoir of an Observant Doubter.