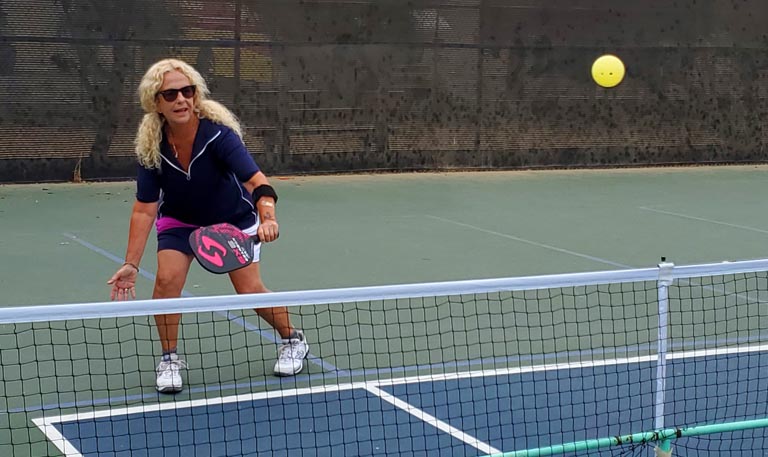 I’m an addict. I know this to be true, because I meet all the criteria for addiction:

Is there is a 12-step program for my addiction? Nope. And there shouldn’t be. I’m an addict but in a good way. Pickleball is my addiction and rather than feel shame and remorse, I’m grateful for my dependence. I haven’t destroyed any families, or killed anyone on the pickleball court.

Pickleball is actually one of the fastest growing sports in the world. A combination of tennis, ping-pong, and badminton, it’s becoming the sport of choice for seniors as well as kids of all ages.

And yeah, it’s addictive. I have the gene.

After all, I’m the adult child of two ping-pong, paddle tennis, and handball playing parents. Growing up, my mother dragged me to the paddle tennis courts in Santa Monica, back in the days of the old Sand and Sea Club on Pacific Coast Highway.

I was too little to play, so I watched and ate tuna fish sandwiches and potato chips courtside. Mom was crazily competitive and I loved seeing the determined look on her tanned face as she smashed the tennis ball at her opponents. She’d check on me between matches to make sure I wasn’t bored out of my mind.

Eventually, as a young teen, I figured I may as well start playing. And I did. I loved it.

My dad played four-wall handball anywhere he could. I was never allowed to play with him. That game was dangerous with its small, hard, fast ball. Paddle tennis and ping-pong were less scary for my small self.

But really, it was a challenging win, since the ship was pitching and rolling as I played in the tournament. Never mind that most of my opponents were in various stages of seasickness or inebriation or both.

I played competitive tennis in high school, and I was the youngest member of the girls varsity tennis team. Although I loved tennis, I never became obsessed with it, like I have with pickleball.

I loved ping-pong most of my adult life, but yearned for a more active, physically exerting sport. I absolutely hated the gym, but forced myself to go. Exercise was torturous, endless drudgery, to be endured, never enjoyed.

And then, one day, while walking my dog along the boardwalk by Muscle Beach in Venice Beach, CA, I stopped to watch the paddle tennis players. Longingly, I wished I could play again, but they were mostly young men fiercely pounding the ball as hard as they could, swearing, sweating, and yelling. They looked scary. And I felt like a beginner again after not playing anything other than ping-pong for decades. Way outta my league.

Then I saw a woman giving a lesson. I asked if she was a teacher and if she could give me a refresher course. We set up a time to meet for my first paddle tennis lesson as a grown-up! And yes, at 65, I’m finally a grown-up.

It felt great to be back on the court playing again. But I was completely exhausted and spent after the first 20 minutes. Over the next few weeks, I took two more lessons with Sonia. On the last day, she asked me if I’d ever played pickleball. No, I answered, but I’d heard of it. She pointed to the back two courts. “Those people are playing pickleball. It’s really fun. You’d like it—it’s addicting.”

I showed up the next day, timidly admitting that I’d never played this ridiculously named game. I had no paddle or ball. The very friendly pickleballers welcomed me. I didn’t have much trouble hitting the ball and keeping it in play, but I was completely frustrated by the rules and scoring. I didn’t understand a thing. But I stayed and played for a few hours.

Leaving the court that day, my head was spinning. Too many rules. I’ll never remember all this. I was ready to quit before I’d really started. And then the addictive gene kicked in and a little voice said to me “just go tomorrow and try it again.” Same thing the next day. And the next. Still borrowing a paddle and messing up on the scoring and rules, I persevered. The pickleballers were kind and encouraging, and they said “keep coming back.” (Almost like a 12-step meeting.)

Well, here’s why. Pickleball is easily accessible and encourages socialization because it’s carefree and fun. (Unlike golf for example—ugh). It also:

It’s a game of equality, making no distinctions between the sexes, nor for social status, race, or ability.

So yeah, am I addicted? I’ve skipped work to play, but really, I’m practicing for retirement.

Have I lost friends? Not really. They think it’s hilarious. They get it even though they may not really get it. (That is, until I get them on the court.)

And I’ve gained an entirely new community of people as gleefully addicted as me.

Recently, I played in my first tournament with my partner, Chris. It was a double elimination tourney, and we lost our first mixed doubles match. If we lost the next, we’d be out for good. Placed in the “opportunity” bracket (a.k.a. losers), we knew we needed a new strategy. So, we became Zen-pickleballers, breathing and focusing on each other and staying only in the present moment. It worked. We won the next match. And the next. After seven hours of nearly continuous play, Chris and I won five consecutive matches to secure the gold medal. A thrilling and deeply meaningful victory!

I’m in for more tournaments. Because I’m addicted.

Have I neglected obligations? Oh yeah. But what’s more important than a good game? Everything else can wait: bills, taxes, laundry—mañana, I say.

Do I have obsessive thoughts? Yep, but they’re easily rectified—grab my paddle and play!

Can I stop after one or two? Yes, but no. There’s nothing like the sweet, sweaty exhaustion I feel after four or more. Doubles, that is.

I certainly don’t have feelings of guilt, but I have withdrawal symptoms, and if I feel like starting in before noon—sometimes even as soon as I wake up—then I give in.

And as far as I’m concerned, for someone with the addiction gene, I just have one word for pickleball.

Stephanie Blank is a published writer and storyteller. Her work has been featured in The Los Angeles Times, English Composition for College Students (McGraw Hill) and soon to be in Chicken Soup for the Soul, “Think positive, live happy”. She tells her stories at Beyond Baroque, in Venice, CA.