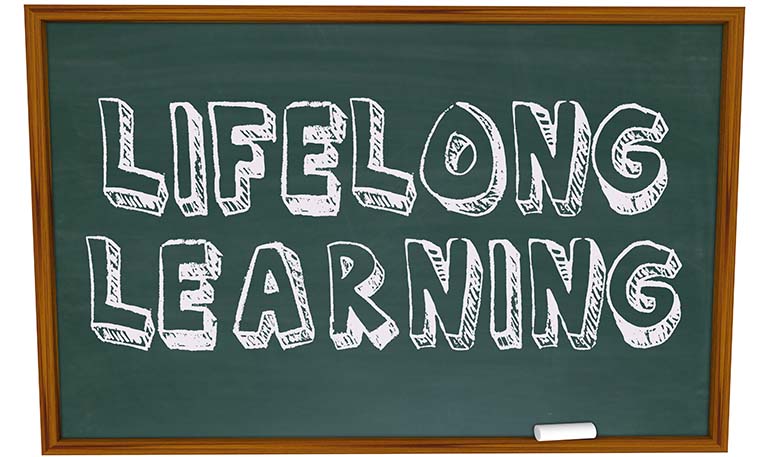 Telos is the Greek word for fulfillment or purpose. Many times, when people approach retirement age, they wonder how they will keep the sense of accomplishment that came with decades on the job, raising a family, or both. Sandi Medendorp recalls the questions she had as her own retirement neared: “How will I spend those long hours that had been devoted to work for over 35 years? Will TV and junk food destroy my brain and body?”

For Sandi and many other people on Seattle’s Eastside, TELOS and the TELOS Student Organization provide the intellectual engagement they seek and the sense of community they crave. “I found people like me, not ready to be consigned to the background of life,” she says, plus opportunities to use her life experiences in new ways.

TELOS is Bellevue College’s Continuing Education program for retirees and other active, intellectually curious adults. The program celebrated its 40th anniversary in 2016, offering dozens of courses each quarter on Bellevue College’s North Campus. Since 2013, the courses have been augmented by the TELOS Student Organization, or TSO, which members say is the first student organization associated with any continuing education program in the country.

If TELOS courses are jumping-off points for social as well as intellectual engagement, TSO is dedicated to creating community among lifelong learners. Through TSO, TELOS students organize and participate in extracurricular seminars, clubs, and special events throughout the year.  TSO is run by an elected council that collaborates with the academic program and committees.

Students and volunteers often report feeling they have “found their tribe,” and that they can use their existing talents or learn something new.  For example, Sandi joined the TSO marketing committee not long after she’d discovered TELOS. She took the lead on creating TSO’s first-ever brochure and learned some new computer skills in the process.

Student members of TSO’s curriculum committee plan monthly “Coffee and Wisdom” talks. Each features a speaker followed by refreshments and a chance to talk informally with the speaker and other students. Between quarters, Interim Seminars bring students together on campus to learn about important topics. Interim Seminars have included a Legal Forum, talks on climate change, and a series called “Cold War 2.” Seminars last from a few hours to a few days, and most are free to TSO members.

The volunteer-run TSO website includes a calendar of TSO meetings, clubs, and events, and a complete list of current TELOS course offerings sorted by day and time. A quarterly newsletter, the TELOScope, features previews of upcoming courses, articles by TELOS instructors, and suggested readings from the TSO community.

Nancy Rogers calls TSO a “lifesaver.” She and her husband moved to the Eastside from North Carolina three years ago. “I can be a hermit,” she says. So soon after she signed up for her first class, she became active in TSO, too. “It helped me meet new people and get involved at a deeper level,” she recalls. “It led to a whole community of new friends. As a newbie in Pacific Northwest, that has been a real boon.”

Sandi Medendorp agrees. “The most rewarding aspect of TELOS is coming together with people in TSO,” she says. “We are all finding satisfaction in sharing passions and volunteering our important life skills to make this organization succeed.  I have found community, fellowship, and spirit at TELOS, healthy food for the brain and body. Here, retirement is to be enjoyed, not feared.”

TELOS and TSO are based on Bellevue College’s North Campus at 14673 NE 29th Place, Bellevue. Courses are affordable at $79 each, meeting for 90 minutes once a week for eight weeks.  Learn more about TELOS and the TELOS Student Organization at TSO-TELOS.org, or call 425-272-5047.