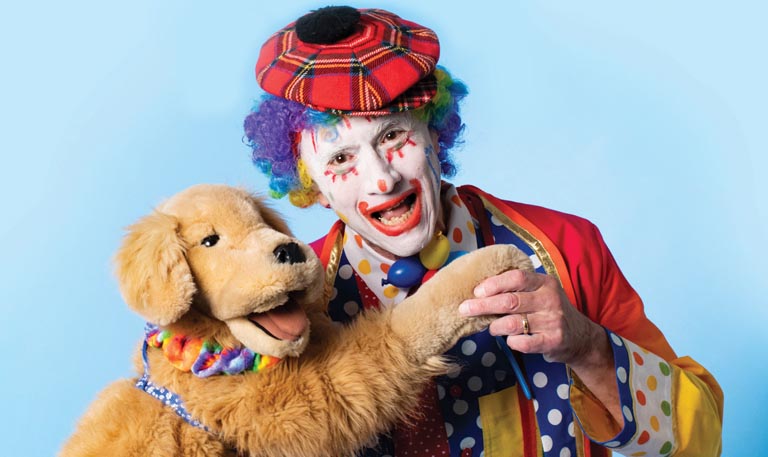 I ring the bell. A young mother answers, giving me a quick, discreet, but meaningful once-over. She’s just discovered she’s hired a children’s party entertainer who is in his 70s. I enter, the kids surround me, and I start to make coins and sponge balls appear from behind their ears. The children don’t notice or care about my age—and after watching me and seeing the reaction of the party guests, the mother relaxes.

Sixty years ago, when I started performing at children’s parties, moms would answer the door, realize they’d hired a 12-year-old, and I’d go through the same, behind-the-ears, enchant-the-children scenario.

My act, whether performed at children’s parties, schools, libraries, festivals, or hospitals, often finds me becoming a clown in front of the audience. I arrive looking pretty much like somebody’s grandfather. About halfway through the show, I begin the transformation. Once I apply make-up and pull the costume over my ordinary clothing right in front of the audience, both kids and parents find me ageless. So do I.

There’s a surge of energy and well-being—a feeling of being suspended in the moment—that comes with performing. I didn’t have to wait decades to learn about this. As a teen magic trick student, I studied with Jack Miller, a prominent East Coast magician. The guy was “ancient,” that is, almost as old as I happen to be right now. He looked sickly and suffered from multiple health conditions including arthritis. My first thought was: What could he possibly teach me? But as Jack moved from his role as teacher to performer, his posture lifted, the joints in his fingers became supple, and he manipulated cards and coins with the grace and skill of a prime-time professional. Watching him on stage, I marveled at the real magic taking place. Not the mind-bending illusions, rather the actual morphing of an aging human into an ageless magician.

Over the years, especially if I’ve been suffering from a cold, headache, or even a more serious ailment, I’ve jokingly called out to my wife, Linda, the woman who has booked my act since 1972, “Get me a show!” I’ve requested this because performing cures, or at least temporarily relieves, just about any ailment. I’ve entertained immediately before heading to the hospital for surgery, and shortly after getting stitched up. Within the limits of the doctor’s guidance, doing a show is often more effective than pharmaceutical pain control.

In all honesty, Linda does not generally stress my age when booking an appearance. “Experience”—that’s what she calls all the years and thousands of bookings that I’ve had. “Hire him and you don’t get someone who is locked into a set routine,” she might say. “Kids need flexibility, and because of Charles’ extensive experience, he can put together a program that will be just right for your particular guests.”

Unfortunately, if you look me up on Google, you may see my age. My age! How did that get there? I’ve tried to have that piece of information removed, believing lots of young parents take note and never bother to call. So far, Google refuses to cooperate.

Recently I’ve acquired a pacemaker. It comes with certain restrictions: Stay away from microwave ovens, hold your cell phone at least six inches from the device, and so on. Concerned that my cordless microphone might be on the do-not-use list, I consulted the internet. Turns out there was only one possible problem regarding pacemakers and wireless mics. The wireless manufacturer, Shure, noted that pacemakers might reduce the sound quality of their microphones! I guess not everything is a medical consideration.

I do make one reference to my age during the show. Biscuit, my dog puppet, gets ready to perform a magic trick. He tells the kids he can guess the age of anyone in the room. Then he looks at me and says, “except him … I don’t count that high.” Everybody laughs.

Charles E. Kraus has performed thousands of library, school, and hospital shows from coast to coast and has been seen on 75 TV shows. He was a member of the Washington Task Force on Child Safety and is the recipient of a King County Dr. Martin Luther King Jr. Humanitarian Award for Community Service. His books include The Teen Magician … That’s You! and a memoir, You’ll Never Work Again in Teaneck, N.J.